Description: For the window gallery *QueenSpecific the artist created a painting device that ostensively responded to the forces of nature, allowing those forces to control the flow of pigment from a suspended container as well as the movement of that container and the canvas suspended beneath it on a separate system of cables. As the statement for the exhibition explained:

“Taking inspiration from Jackson Pollock’s dictum “I am nature”, The Hula-Graph Actualizer functions like a seismograph, barometer or MRI device by sensing, measuring and recording particular phenomena. The Hula-Graph Actualizer translates and records forces of “nature” by releasing pigment onto a canvas while parts of the device are in motion as a result of various forces acting upon them.” 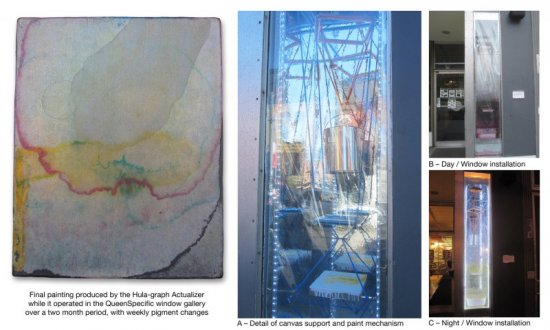